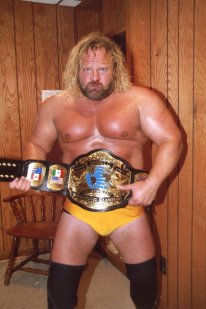 Andrew Anderson is not your typical meathead wrestler.He graduated St Peter's College in 1989 with a degree in Business Administration. He got his start in the wrestling world in 1997,discovered by wrestling legend Jimmy "Superfly" Snuka. He trained extensively under the tutelage of Gino Caruso, Nickolai Volkoff, and the Kodiak Bear at Caruso's ECPW gym in Lake Hiawatha. His first tag team partner was Volkoff back in 1997. Anderson has a great love and respect for the wrestling greats that he watched as a child, and it's fitting that he now has earned their respect. Andrew Anderson is the first JCW heavyweight champion, a title he won back in 2000. He's also the former ECPW tag champ twice with Pub Bully,and the former ECPW TV champ,defeating Mo Sexy in a brutal cage match for the ECPW heavyweight championship still considered one of the greatest cage matches in Indy Pro Wrestling. As ECPW champ, he successfully defended his title against icons like Tito Santana, the Metal Maniac,Tony Atlas,Test, Demolition,Ax,Hacksaw Jim Duggan,Brutus the Barber Beefcake,Crowbar,Johhny Thundar,Mo Sexy,Nikolai Volkoff, and Superfly Snuka. Formerly managed by Doug Devito, during a "face turn" in 07 Anderson is once again "heel" and for a 3rd time in 2012 became the 1st ever 3x ECPW champion , also he won the local NYC promotion RWA heavyweight title which he proceeded to retire that title . Anderson, never one to rest on his laurels, got bitten by the acting bug in 2001. He starred as the Werewolf in Director Michael P. Russin's horror anthology entitled Creepy Tales- Girls Night Out. He also starred as a Viking in a recent General Electric commercial. He made an appearance as Andrew "the Anvil" Anderson in a locker room scene in the new movie entitled The Wrestler, which stars Mickey Rourke. Anderson has two daughters, Olivia and Hope,. Andrew Anderson had a dream of becoming a wrestling star, and he has achieved it. He truly is a multi faceted individual who is always there for friends and family. In these days of self absorbed megalomaniacs, Anderson is a breath of fresh air.