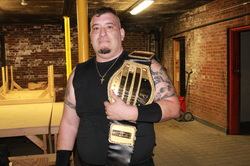 Formerly from The Bronx NY now residing in Otisville NY
Rican Havoc started His career under training of Former WWF, ECW, ROH superstar Tony Devito in 1996.  He Wrestled
for many federations WWE, NEW, JAPW MWA and ESW to name a few. Held the MWA tag team titles with his partner Diablo Santiago as one half of the most dominant Tag teams in MWA history. Now after a 12 year Sabbatical once again returning to the ring to dominate over all the competition that ECPW (Hudson Valley) has to offer. At 6’6” 340 lbs the bar has now been raised and the competition  should be worried.